How pollen allergy is made worse by air pollution ? 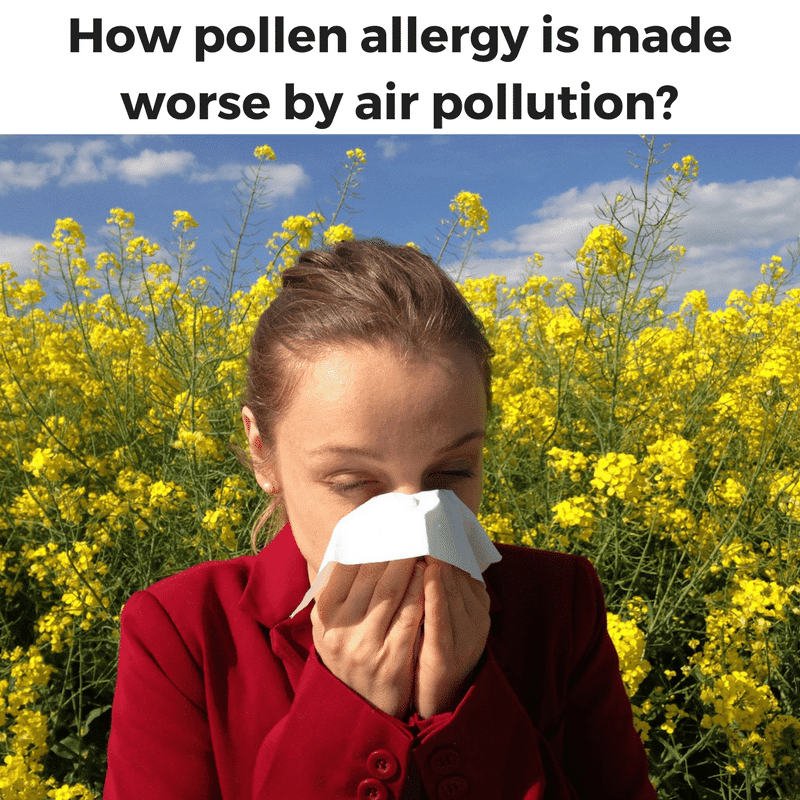 For many people spring is a joyous season, a period of renewal and fresh optimism about the future. But for sufferers of pollen allergy – technically known as allergic rhinitis but more commonly known as hay fever – the warmer weather is no cause for celebration. Instead it triggers perpetual sneezing.  Other symptoms can include itchy eyes and throat, face pain, headaches, a runny nose and wheezing. Kids may find it difficult to concentrate or sleep properly and if they are taking school exams they may find their performance affected

Unfortunately, if you’re a city dweller you’re likely to be sneezing even more. That’s because air pollution ‘fuels’ a pollen allergy. And the whole problem seems to be getting worse. A century ago, there were relatively few sufferers of pollen allergy. But the number rises every year. Evidence is growing that air pollutants exacerbate pollen allergies – as well as more obvious conditions such asthma. This makes cities can dangerous places for hay fever sufferers.

Common air pollutants, such as ozone, sulfur dioxide, and nitrogen dioxide, have been shown to hit asthma sufferers particularly hard. But by irritating the airways and skin, air pollutants also make it easier for pollen grain to penetrate the human body.

How exactly does the big city make life tough for pollen allergy sufferers?  Unfortunately, vehicle emissions create a ‘photochemical smog’ that traps pollen and prevents it from escaping into the upper atmosphere. Too much pollen then lurks at ground level and is breathed in by hay fever sufferers. So hay fever is likely to be twice as common in urban zones because of the air pollution caused by traffic and vehicle fumes.

Timing is everything, as they say, in life. And the same applies to pollen allergies. Pollen counts normally rise during the morning, peak about midday, and then gradually fall. So the lowest pollen counts are usually before dawn, and in the late afternoon to early evening. But, of course, this is all relative and if the pollen count is extremely high on a particular day you could still find yourself sneezing a lot.

How does air pollution affect allergies?

Pollen allergies affect between 10 percent and 40 percent of the world’s population, according to the World Allergy Organization. Scientists always suspected that the increased incidence of allergies was linked to air pollution and climate change, but they couldn’t explain why. The interaction of pollen, weather changes and pollution has been found to increase the length of the allergen season, the amount of allergenic pollen/spore (productivity) and the allergenicity per pollen.

The combined effect of pollutants is to make allergens more powerful. Researchers found that ozone sets off a chain of chemical reactions that changes its protein structure. The altered allergen is then more likely to bond with nitrogen dioxide, which exacerbates immune response because it is especially irritating to the immune system.

Read more : 5 tips to protect your children from air pollution

What can pollen allergy sufferers do?

Those afflicted must pay special attention to pollen counts. (During spring and summer the pollen account is usually included in the weather forecast.) They should also monitor the daily pollution index. On bad days, exercise routines may need to be modified. Reducing your exposure to pollen should help, although this is not always easy or practical.

If you have a severe pollen allergy, you may choose to exercise indoors. City dwellers who suffer from pollen allergy would do well to close windows. This can sound incredibly suffocating on a warm spring day. After all, we like to air our homes and offices. One answer could be to buy a special condensation control unit, enabling access to continuous fresh, filtered air without having to open a single window.

You should also get a consultation with an allergist, if you live in a city blighted by air pollution, who can prescribe you a medication. You will also need to keep ahead of the pollen season. For example, if your symptoms are typically at their worst in mid-April, start taking medications a few weeks earlier. Likewise, if the end of winter is exceptionally mild, it might be wise to begin taking your medication early.

Immunotherapy options are also available for those with severe pollen allergies. Allergy shots can help your body build resistance to pollens. These medications must be started 12 weeks before symptoms are expected to begin.

Pollen count is not everything

But even if you see a high pollen count predicted in the newspaper, on a smartphone app or on TV, it doesn’t necessarily mean that you will be affected. There are many types of pollen – from different kinds of trees, from grass and from a variety of weeds. As a result, a high overall pollen count doesn’t always indicate a strong concentration of the specific pollen to which you’re allergic.

The opposite can be true, too: The pollen count might be low, but you might find yourself around one of the pollens that triggers your allergies. That’s why – again – you will need to consult an allergist who can help you identify which pollens bring on your symptoms. An allergist can also help you determine which medications will work best for you.

Watch your diet and the clothes you wear

There are also other precautions you can take as the hay fever season approaches. Experts agree that a nutritional approach to hay fever involves cutting down on foods which encourage mucus production, such as milk products, sugar and excessive starch, as well as caffeine and alcohol.

You should also eat more products that have natural antihistamine and anti-inflammatory properties. Good foods include all vegetables apart from tomatoes, all fruits apart from oranges, raw, unsalted nuts and seeds, garlic and onion. Take honey, maple syrup, brown rice syrup or barley malt as sweeteners if required. Other foods that may help you to ward off pollen allergy include beans, lentils and tofu. You should also aim to drink up to two litres of water a day and drink plenty of herbal teas.

Some hay fever sufferers find a pollen mask very effective especially for jobs such as gardening, mowing the lawn or even doing indoor jobs. Anti-hay fever masks are easy to wear and will prevent pollen and other particles from entering your lungs.

In warmer weather you should remove house and garden plants that could trigger your pollen allergy. You could also wear wrap-around sunglasses to avoid pollen entering your eyes. Also, avoid hanging washing outside to dry when the pollen count is high. This is because pollen can get trapped in the fibres of clothes and bed linen.

Finally, if you suffer from pollen allergy you have – as we have seen – a special interest not only in the pollen count but also in the air pollution levels. So let’s all make our air cleaner out there!

This site uses cookies.Okay, thank you