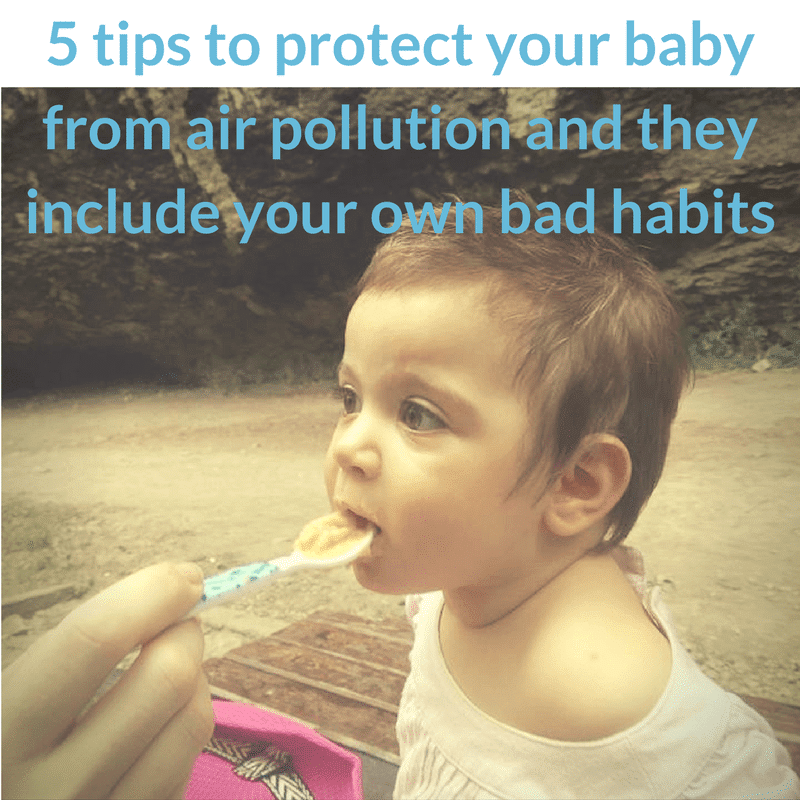 1. Don’t smoke while pregnant and don’t smoke in public!

If you’re a pregnant mother, protect your unborn child by not smoking. And that includes passive smoking. When a pregnant woman breathes in smoke, it can cause inflammation that disrupts blood vessels in her vital organs. After your baby is born, keep the same regime. Living with a smoker can be equivalent to breathing the air in the world’s most polluted cities, according to a study.

Breathing in bad air is bad for you. And when we talk about ‘bad air’ we mean air contaminated with particulate matter known as PM 2.5. These damaging particles, which can enter your baby’s bloodstream and lungs, are found near factories and busy main roads. Indoors, wood-burning or coal-burning stoves, and, yes, cigarette smoke, are all leading producers of PM 2.5. And remember that babies have very sensitive lungs and breathe 50 per cent more out in proportion to their weight than adults.

Believe me, there’s nothing worse for a baby or child to grow up in a smoky household. As a child of the 1970s (a decade of appalling ignorance about health), I can vouch for its dangers.  I lived with several 40-a-day smokers and grew up inhaling that filthy air over the breakfast table. I still have a residual cough. Protect your baby by making your home a clean environment!

Support all measures to make public places tobacco-free. I remember when even the London underground had smoking carriages. Thankfully, much has changed in recent decades. But you should come down hard on establishments that flout the smoking ban. Mothers who go out with their babies prefer to visit cafes rather than bars. Yet, in my adopted city, restaurateurs tend to circumvent the ban on smoking indoors by partitioning a ‘windowed’ section that supposedly qualifies as ‘outside’. Actually, of course, it’s a terrible smoke-ridden environment. Any public eating area that is in any way cordoned off should not qualify as ‘outside’.

2. Avoid the worst air in the city

If you live in those cities where the air is especially filthy, then life will be tough. But you can still check daily air pollution forecasts on local media outlets and adapt to it.

Pollution levels can vary dramatically within a city. Monitor wind direction and be aware of daily fluctuations. Remember that if you go outside and start wheezing and coughing it will be a thousand times worse for your baby. Don’t burn wood or trash and avoid areas where residents do so.

If you’re concerned that the air is bad on your daily school ‘run’, then use pram covers to protect your baby or child. This was highlighted by a recent study in the journal Environmental Pollution. “One of the simplest ways to combat this is to use a barrier between the in-pram children and the exhaust emissions, especially at pollution hotspots such as traffic intersections,” said the report’s author, Dr. Prashant Kumar. You and your baby could also use a mask.

3. Improve the air in your home

Apart from avoiding smoking, there are other things you can do to protect your baby from air pollution. Prevent mold growth at home by lowering the humidity through the use of exhaust fans in kitchens, bathrooms and laundry rooms, or a dehumidifier. Increase airflow and ventilation by opening windows and doors. You may also consider using an air filter. Fit thicker curtains to keep pollution out.

Read more: Asthma sufferers have to beware of the big city’s air pollution

At home there are various substances known as Volatile Organic Compounds (VOCs) which can be emitted from certain liquids and gases. Unfortunately, there are many harmful products in the home that contain VOCs. And these VOCs have a much higher concentration indoors – up to 10 times higher, in fact. If you use these products, you can be unwittingly exposing yourself to high levels of air pollution.

So what can you do? Keep harmful products like pesticides and paints in a shed separate from your home. Always dispose of them properly. Avoid using scented candles or products with odour-hiding fragrances. Install and check regularly your smoke, carbon monoxide, and radon alarms. Do not use air cleaners that emit ozone, which is a lung irritant. Use ceiling fans, replace light bulbs with CFL bulbs, turn off computers and appliances when not in use, and insulate your home. If your car is not in use, always turn the engine off.

Many perfumes and sprays may hurt your baby’s fragile lungs. Sprays may be relatively harmless to adults who can move around quickly. But your baby cannot escape. Air fresheners can do more harm than good. Treating greenhouses or gardens and household plants may interfere with your babies’ lungs if they are near. You should also avoid toxic fumes from new carpets and perfumes.

Although there’s a limit to what you as an individual can do about outdoor air pollution, you can ‘compensate’ for the assault on your baby’s lungs. Avoid over-exercising when air quality is at its worst. Restrict sports and heavy activity to ‘cleaner’ days.

Make sure your kids drink plenty of water as a way of detoxifying the body. Some foods also contain powerful antioxidants that can protect your baby from the harmful consequences of air pollution. Ensure that you and your babies eat the right foods – especially fruits and vegetables that have the right combination of Vitamin C and omega fatty acids. Indeed, Vitamin C is the single most powerful antioxidant you can take. The easiest way to get your daily ‘fix’ is to drink the juice of two lemons daily. But there are many foods that are rich in Vitamin C, so you are spoilt for choice!

Read more : What are the causes of air pollution?

Vitamin E also helps to ward off an injury to human tissue. Plant-based cooking oils are a good source for this. So are fish, sunflower seeds, spices and herbs that can be incorporated into your daily diet. Herbs and spices have also been suggested in Ayurvedic medicine as good for fighting respiratory ailments. Turmeric, in particular, is a well-known antioxidant and believed to help cleanse the lungs.

5. Avoid the car and walk with your baby instead

Finally, if you think you can protect your baby from air pollution by getting around in your car – then think again! Air pollution levels are, in fact, 21% higher in your car than outside owing to harmful gases from exhausts that pass straight through car air filters and accumulate in car cabins. Set your air to ‘recirculated’ while you are in traffic, so as to reuse the air inside the car rather than suck in air pollution from outside.

Better still, walking instead, with your pram in tow, enables you to avoid pollution on busy roads which is proven to reduce exposure by 30% to 60%. And, of course, by 21% higher in your car than outside, you are being an environmentally-friendly citizen and helping to reduce overall air pollution.

So being a ‘good’ citizen pays dividends in every way. Your baby is entitled to breathe clean air and even if you live in a dirty city you can help to protect your baby from air pollution.

This site uses cookies.Okay, thank you